We identified various barriers that make it challenging to launch a product in a specific market. We address these barriers and provide assistance in several forms. (see also the roadmap on the projects homepage .

How to comply with European legislation?

In the section below the medical device regulation is shortly described and we will provide you with information and tools that will help your company to solve the challenges:

The section on the right of this page displays networks where you can become a member to gain help and support while you try the following:

The key changes in the MDR is classification according to risk, contact duration and invasiveness, further expansion of the product scope. The requirement for documentation, clinical evaluation, postmarket clinical follow-up and traceability is significantly increased for all risk classes.

The European Database on Medical Devices (EUDAMED) provides an information exchange system between the European commission and the competent authorities. The Unique Device Identification (UDI) and EUDAMED shall improve the traceability. EUDAMED will now also store information regarding the postmarket surveillance activities.

All European notified bodies for medical devices will lose their designation as of the date of application of the MDR and IVDR due to the change in the legal framework and must therefore be redesignated under the MDR. All notified bodies are published on the NANDO database.

Here you can participate in courses and webinars.

Understand the structure of the healthcare systems

The German and the Danish healthcare system are notably different for two essential characteristics:

SHI and PHI use the same providers. Hospitals and physicians treat both statutorily and privately insured patients, unlike hospitals in many other countries. Private insurances influence the German market, whereas they play a minor role in the Danish market. However, 2,9 million Danes have additional private health insurance, “cepos“.

Background information on the healthcare systems in brief 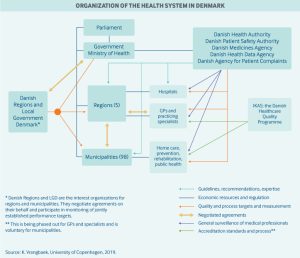 Healthcare in Denmark is provided by the local governments of the five regions, with coordination and regulation by central government, while nursing homes, home care, and school health services are the responsibility of the 98 municipalities.

Danish government healthcare expenditures amount to approximately 10.4% of the GDP, of which around 84% is funded from regional and municipal taxation redistributed by the central government. Because basic healthcare is taxpayer-funded, personal expenses are minimal and usually associated with co-payments for certain services. Those expenses are for the most part covered by private health insurance.

Use of electronic health records is universal, and efforts are underway to integrate these at the regional level. For every 1,000 people in Denmark, there are about 3.4 doctors and 2.5 hospital beds. Spending on hospital facilities, at 43% of total healthcare spending, is above the average for OECD countries, even though the number of beds has decreased considerably in the last decade. 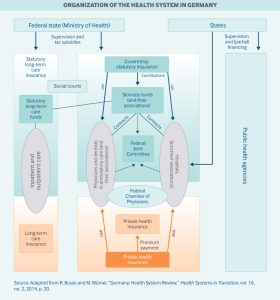 In Germany, the principle of self-administration applies: Although the Federal state sets the legal framework and tasks, the insured and contributors as well as the service providers organise themselves in associations that are responsible for providing medical care to the population.

The Federal state holds most university hospitals, while municipalities play a role in public health activities and hold about half of all hospital beds. Patients health insurance covers costs that are directly associated with the treatment in the hospital. The State in which the hospital is located finances so-called ‘investment costs’ such as diagnostic machinery, ambulance vehicles, and building maintenance. Source: “Report: Comparison of the Danish and German healthcare system“

The German health care system is supported and self-managed by many institutions and actors. The core area, also known as the first healthcare market, comprises the area of “classic” health care, which is largely financed by statutory health insurance (SHI) and private health insurance (PHI) including nursing care insurance. All privately financed products and services related to health are referred to as the second healthcare market. Source: “Bundesgesundheitsministerium – Gesundheitswirtschaft im Überblick“ 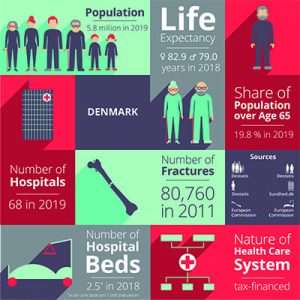 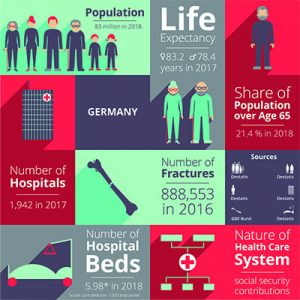 The Danish medical industry in numbers

About 250 companies in Denmark work dedicatedly with the various branches of the medical industry. But in total, just over 1,000 companies are to a greater or lesser degree employed in the medical field. The 20 largest companies account for approx. 75 pct. of revenue. 2/3 of the companies in the industry have less than 50 employees. The Danish market for medical devices accounts for 0.5% of the global market. Expenditure on medical equipment amounts to approx. 5 pct. of the total public expenditure on our healthcare system “Espicom”

The public health service via the five regions is the largest buyer of the industry’s products. Other customers are municipalities (e.g. in connection with care and rehabilitation), private hospitals or private citizens. In 2014, the USA was Denmark’s largest export market for medical equipment, with 25% of exports. This was followed by Germany (15%), Sweden (6%), Japan (4%) and China (4%). “Espicom”. Over 95 pct. of Danish production is exported.

Compared with the economy as a whole, the healthcare industry is showing above-average growth rates. At 4.9% per year, it has grown faster than the German economy as a whole over the past ten years. The German healthcare industry employs 7.6 million people and generates almost 370 billion euros. This corresponds to a share of 12.1 per cent of gross domestic product. The industry contributes to achieving key economic policy objectives and influences them in terms of adequate and steady economic growth and high employment levels.

Medium-sized companies dominate the MedTech sector in Germany. 93 per cent of MedTech companies employ fewer than 250 people. There are 13,000 micro-enterprises alone with around 60,000 employees. Only 90 MedTech companies in Germany have more than 250 employees. The MedTech industry is innovative and has very short product cycles. German medical technology manufacturers generate about one-third of their turnover with products that are not older than 3 years. “BVMed – Branchenbericht Medizintechnologien 2020”.

Healthcare in Denmark (Ministry of Health)

This website uses cookies so that we can provide you with the best user experience possible. Cookie information is stored in your browser and performs functions such as recognising you when you return to our website and helping our team to understand which sections of the website you find most interesting and useful.

Strictly Necessary Cookie should be enabled at all times so that we can save your preferences for cookie settings.

If you disable this cookie, we will not be able to save your preferences. This means that every time you visit this website you will need to enable or disable cookies again.